Amos 3:3: “Can two walk together, except they be agreed?”

The rector at a grouped Church of Ireland parish in County Donegal has moved on to pastures new, but not without getting the blessing of the local Papist priest first.

Rev David MacDonnell (pictured, top) was moving from the parishes of Dunfanaghy, Raymunterdoney and Tullaghobegley (no wonder he’s moving with a mouthful like that!) having been promoted to the position of Dean of Ossorry and rector of St Canice’s Cathedral in Letterkenny.

And his farewell service, which was held about a month ago, was attended by ‘Father’ Martin Doohan of Holy Cross Roman Catholic Church in Dunfanaghy, who was full of praise for the departing Rev David MacDonnell.

The emissary of Papal deceit took the floor at a point and spoke about the “great bond of friendship” that exists between all three clergy in the town of Dunfanaghy.

He also presented him with a Celtic cross on behalf of the parishioners at Holy Cross Church. What a lovely memento to remind him of his ecumenical days in Donegal!

‘Father’ Martin Doohan then “thanked Rev MacDonnell for his friendship and wished him well in Kilkenny”.

All very cosy, isn’t it?

You will notice that it was mentioned about the great bond of friendship between “all three clergy in the town”.

Who was the other you may (or may not) be asking?

It was none other than Rev Andrew Watson (pictured, below), who our more long-standing readers may remember is the minister of Dunfanaghy Presbyterian Church and whose book is printed and recommended by a Roman Catholic Church publishing house. You can read our article from then by clicking here. 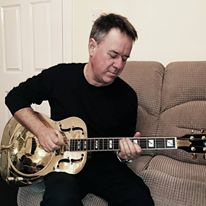 ‘Finding Our Way Home: Prayers And Reflections For Our Journey In Christ’ is Rev Andrew Watson’s compendium of ramblings and it is published by Veritas, a publishing house owned by the Irish Catholic Bishops Conference.

It was on the recommended reading list for the Roman Catholic Church’s World Meeting of Families event, which was held in Dublin last week and was the reason for the visit of the Pope to Ireland.

So the writings of this so-called Protestant minister were considered by the Roman Catholic Church to be a suitable accompaniment for the visit of the Pope.

And there he was betraying his Protestant heritage showing his unity with Rome once more.

But back to Rev David MacDonnell, and he showed his absolute agreement with the sentiments expressed by the Romanist, ‘Father’ Martin Doohan, concurring with his remarks “about the great community spirit in the area”.

Rev David MacDonnell also said he “had intended to stay longer in the area; but the post in Kilkenny had come up and he had decided to take it”, with no mention made of the Lord’s will for him.

The service was hosted by Churchwarden Patrick Knowles who paid tribute to his “truly inspirational ministry”, drawing particular attention to the repointing of the church’s exterior and installation of a new tiled floor inside the church.

Paul’s charge to Timothy as a minister of the gospel was this: “Preach the word; be instant in season, out of season; reprove, rebuke, exhort with all longsuffering and doctrine” (2 Timothy 4:2).

That’s the primary focus of any minister, or it ought to be, not establishing friendly relations with Rome or leading the redecoration.

Patrick Knowles also drew attention to how Rev David MacDonnell’s penchant for interior design had led to “an increase in available space at the front of the church”, which was apparently “extremely innovative and brings our church forward in time”.

What goes on in this extra innovative space is anybody’s guess.

He concluded that “our loss is Kilkenny’s gain”.

Perhaps they need new curtains picked out for the church hall.

This service is an example of what one could call everyday ecumenism, just part of the constant stream of compromise and consorting with Popery.

Many may not like it to be highlighted, but we must if we are to be serious in our efforts to be faithful to God.

Isaiah 58:1: “Cry aloud, spare not, lift up thy voice like a trumpet, and shew my people their transgression, and the house of Jacob their sins.”

Let us be serious in our devotion to God, and let us fail not to speak out against the agents of error in our land.