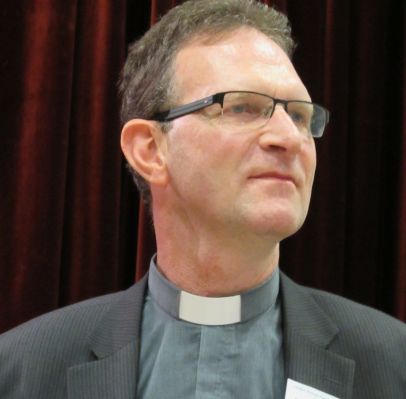 The Dean of Clogher, Rev Kenneth Hall, has announced his desire to continue to betray his church’s Protestant heritage by compromising with Rome.

Rev Kenneth Hall’s appalling ecumenical conduct has previously been highlighted on ‘Protestant Revival’, as he previously held a service in St Macartin’s Cathedral in Enniskillen celebrating the ‘Blessed’ John Sullivan, a man who converted to Catholicism, became a Jesuit priest and is now in the process of being made a saint by the Pope.

Not only that, we highlighted his close association with ‘Monsignor’ Peter O’Reilly, the Papist mouthpiece for Rome as they refused permission for a memorial to be placed on their land to the Protestant victims of an IRA bomb planted on Roman Catholic Church property as they gathered in Enniskillen on Remembrance Sunday.

Rev Kenneth Hall remained silent at that time, making no criticism of the Roman Catholic Church or his ecumenical pal, ‘Monsignor’ Peter O’Reilly, with whom he is pictured, below.

However, Rev Kenneth Hall has not remained silent in expressing his desire to continue down the ecumenical road he is on.

In fact, in an excerpt of a sermon preached last month on his church’s website, he has stated his ambition to continue to “work tirelessly and endlessly” with “clergy from all denominations”, including, of course, Rome.

Addressing the fact that many Protestants, especially in an area like County Fermanagh which suffered so horrendously at the hands of the Roman Catholic IRA, might be unhappy with his conduct, Rev Kenneth Hall simply says that he and other betrayers of Protestantism, which is Biblical Christianity, “are perfectly capable of defending our faith”.

It is a bald assertion with no evidence to back it up, no demonstration of how he has done so and no Biblical warrant disclosed for mingling with the manifold blasphemies of Rome.

There is, however, crystal clear warrant from Scripture for steering well clear of the corrupt system of Rome.

Ephesians 5:11 says: “And have no fellowship with the unfruitful works of darkness, but rather reprove them.”

2 Corinthians 6:14-17 says: “Be ye not unequally yoked together with unbelievers: for what fellowship hath righteousness with unrighteousness? and what communion hath light with darkness? And what concord hath Christ with Belial? or what part hath he that believeth with an infidel? And what agreement hath the temple of God with idols? for ye are the temple of the living God; as God hath said, I will dwell in them, and walk in them; and I will be their God, and they shall be my people. Wherefore come out from among them, and be ye separate, saith the Lord, and touch not the unclean thing; and I will receive you”.

Religious separation from propagators of error, which Rome undoubtedly is, with its lie of purgatory, prayer to Mary and saints, blasphemy of the Mass and corrupt gospel of salvation by works, to name a few, is absolutely necessary.

However, Rev Kenneth Hall repeatedly and consistently refuses to do this and indeed is making a virtue of his rejection of the Bible.

Not only has he made a virtue of it, he has made a career from it as well, as he has himself attested.

Rev Kenneth Hall says: “Everywhere I have moved to since my clerical life began twenty years ago in Cookstown through my days in Dungannon, Coalisland and Stewartstown and now here in Enniskillen, I have sought to do likewise. My message has not changed…”

From the outset of his ministry, Rev Kenneth Hall says he has sought to engage in ecumenical compromise with Rome.

The root of his ministry is in disobedience to God’s Word, therefore the fruit cannot but be corrupt.

Like many ecumenists, Rev Kenneth Hall uses the pretext of what is euphemistically called ‘The Troubles’ in Northern Ireland to justify his conduct.

He says: “We want bitterness and hatred and the gun and the bomb removed for ever.”

So do all right thinking people, but to think that compromising with the Papacy can bring lasting peace is a nonsense.

The architects of murder, the IRA, are now represented in the highest levels of political life in Northern Ireland through their political wing and cheerleaders to this day, Sinn Fein.

The gun and the bomb were only largely put down the back of the sofa by republicans because they got forgiveness without repentance.

Hundreds of murderous Romanists were released from prison, where they still ought to be, as part of the political deal the likes of Rev Kenneth Hall championed, and they still refuse to apologise for the murder campaign they unleashed on the Protestants of Ulster.

That is not peace, regardless of what Rev Kenneth Hall likes to say.

We are reminded of the false prophets in the time of Jeremiah who claimed all was well.

Jeremiah 6:13-14: “…and from the prophet even unto the priest every one dealeth falsely. They have healed also the hurt of the daughter of my people slightly, saying, Peace, peace; when there is no peace.”

While Rev Kenneth Hall renews his ecumenical vows, let us draw near to Christ and pray earnestly that ecumenists and apostates scattered through our land are removed from their pulpits or else gloriously converted by Christ.

Let us have the same vow as that faithful servant of God, Joshua, when he said in Joshua 24:15: “As for me and my house, we will serve the Lord.”