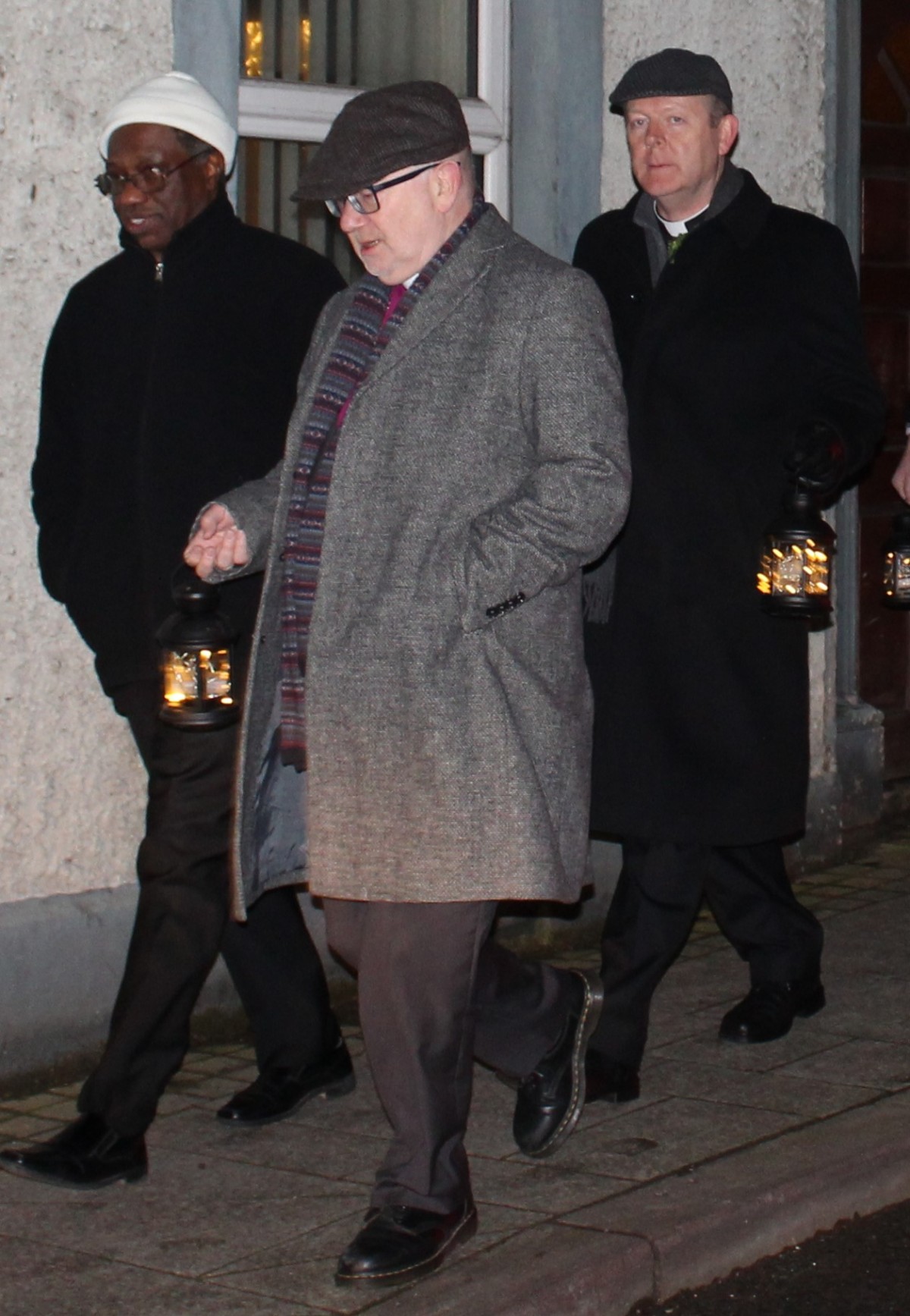 Pictures have now been released online of this dreadful betrayal of Protestantism and they reveal something even worse than we had originally feared.

Most Ecumenical Richard Clarke led his people into the clutches of Rome, not only with Roman Catholic Archbishop of Armagh Eamon Martin, but also the Papal Nuncio to Ireland, or the Pope’s special envoy here.

He can be seen in the top photograph happily smiling and chatting with the Pope’s representative in Ulster, Archbishop Jude Thaddeus Okolo, a Nigerian Papist. Just behind the pair is Eamon Martin.

Even more distressingly still, the Armagh Catholic Parish, on its facebook page, made a post, which we have pictured below, showing the Nuncio in full Romanist garb, along with Eamon Martin and others, below the sentence: “New Papal Nuncio pays first visit to Ireland & joins for Vigil Mass on the eve of St Patrick’s Day”. We have also included a picture of the group heading up the steps into the Roman Catholic cathedral, with what appears to be an Irish tricolour in the top left of the photograph.

It is certainly likely Most Ecumenical Richard Clarke hung around for the blasphemous sacrifice of the Mass. After all, apostates like him hate to offend Romanists. They’d much rather offend God.

Hebrews 10:11-12 says: And every priest standeth daily ministering and offering oftentimes the same sacrifices, which can never take away sins: But this man, after he had offered one sacrifice for sins for ever, sat down on the right hand of God.”

Christ did it all on the cross, the shedding of His precious blood at Calvary is alone enough to save us.

We will remind Most Ecumenical Richard Clarke what his 39 Articles, which are supposed to govern his church, say about the Mass.

Article 31 states: “The Offering of Christ once made is that perfect redemption, propitiation, and satisfaction, for all the sins of the whole world, both original and actual; and there is none other satisfaction for sin, but that alone.

“Wherefore the sacrifices of Masses, in the which it was commonly said, that the Priest did offer Christ for the quick and the dead, to have remission of pain or guilt, were blasphemous fables, and dangerous deceits.”

Does Most Ecumenical Richard Clarke believe this? If not, then why is he polluting a pulpit with his very presence? Regardless of whether or not he did attend the Mass, one must seriously question his view on this given his cosy relationship with the Roman Catholic archbishop.

One, indeed, must seriously question him in general. He certainly fails the test of a godly man set out in Psalm 1:1, where it says: “Blessed is the man that walketh not in the counsel of the ungodly, nor standeth in the way of sinners, nor sitteth in the seat of the scornful.”

This headlong lurch to Rome he is leading is markedly similar to the apostasy in Jeremiah’s day. At one time, like the children of Israel, the mainstream Protestant churches in Ulster were faithful to the gospel, but they have gone a whoring after another god. In today’s case it is the false god of ecumenism, in Jeremiah’s day it was various false gods, in particular Baal.

Jeremiah 2:4-11 says: “Hear ye the word of the Lord, O house of Jacob, and all the families of the house of Israel: Thus saith the Lord, What iniquity have your fathers found in me, that they are gone far from me, and have walked after vanity, and are become vain? Neither said they, Where is the Lord that brought us up out of the land of Egypt, that led us through the wilderness, through a land of deserts and of pits, through a land of drought, and of the shadow of death, through a land that no man passed through, and where no man dwelt? And I brought you into a plentiful country, to eat the fruit thereof and the goodness thereof; but when ye entered, ye defiled my land, and made mine heritage an abomination. The priests said not, Where is the Lord? and they that handle the law knew me not: the pastors also transgressed against me, and the prophets prophesied by Baal, and walked after things that do not profit. Wherefore I will yet plead with you, saith the Lord, and with your children’s children will I plead. For pass over the isles of Chittim, and see; and send unto Kedar, and consider diligently, and see if there be such a thing. Hath a nation changed their gods, which are yet no gods? but my people have changed their glory for that which doth not profit.”

A phrase in verse 8 sums up Most Ecumenical Richard Clarke’s odyssey to Rome perfectly. It says the pastors “walked after things that do not profit”.

Oh that Protestants in apostate churches would have the scales lifted from their eyes and that they would abandon the old dead churches which have ‘Ichabod’ branded across them in massive letters.

Please pray with all your heart and soul that God’s glory will not depart from Ulster and instead we will experience great revival blessing in our land.

6 thoughts on “Pictured: Church of Ireland Archbishop of Armagh leading Protestants to Rome before Mass with Papal Nuncio to Ireland”