It can come as little surprise that apostate so-called Protestant church leaders in Ulster have voiced their disappointment at the news that the Pope will most likely not be visiting Ulster this year.

No Pope has ever been in Northern Ireland and it appears likely that will continue to be the case, and this is something we must thank God for.

Pope Francis is to come to the World Meeting of Families event, a massive Roman Catholic festival which will be held in August in Dublin. His planned two day trip will apparently not involve a trip across the border.

And this has caused great anguish to Protestant clerical traitors, including our old friend, the Most Ecumenical Richard Clarke, Church of Ireland Archbishop of Armagh and Primate of All Ireland (what grand titles for such a grand fool!).

We have already highlighted the Most Ecumenical Richard Clarke leading his church into the clutches of Rome on St Patrick’s Day, so it can come as no surprise that he would find it “remarkable and wonderful” if “that man of sin, and son of perdition” came to Ulster.

He was joined in his treachery to Biblical Christianity by Rev Harold Good, the former President of the Methodist Church.

Rev Harold Good (pictured) said he was “very pleased” the Pope was coming to Ireland before going on to say that “Pope Francis, is a universally respected person, not just for his own views and ecumenical spirit but for his own integrity and humble approach”. 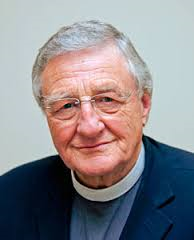 There will be no respect offered here to “that Antichrist” and certainly not for his views, which are completely unscriptural and which see him set his face against God. An ecumenical spirit is nothing to be commended, and indeed the Pope uses it as nothing other than a means to lure in ignorant and apostate Protestants. And as for integrity and humility? Rev Harold Good must be joking!

This is the man who just this week passed on his sympathies following the death of a paedophile priest originally from Ballycastle in County Antrim, Cardinal Keith Patrick O’Brien. Where was the Pope’s letter of sympathy to that monster’s victims?

This is the man who, on a trip to Chile recently, offended victims of sex abuse perpetrated by a Romanist priest by accusing them of slander against a priest they claim was aware of the abuse they suffered.

Rome’s face never changes, like her master the devil she is “a liar and the father of it” (John 8:44).

The Pope, by the very titles he takes upon himself, blasphemes all three persons of the Godhead.

Firstly, he calls himself the ‘Holy Father’, which blasphemes against God the Father. The Bible says in Matthew 23:9: “And call no man your father upon the earth: for one is your father, which is in heaven.”

Secondly, he blasphemes against God the Son when he takes on the name of the ‘Pontiff’, which means ‘bridge’. He is claiming to be a bridge between us and God. But the Bible says in 1 Timothy 2:5: “For there is one God, and one mediator between God and men, the man Christ Jesus.”

John 14:16-17 says: “And I will pray the Father, and he shall give you another Comforter, that he may abide with you for ever; Even the Spirit of truth; whom the world cannot receive, because it seeth him not, neither knoweth him: but ye know him; for he dwelleth with you, and shall be in you.”

Rev Harold Good then went on to say: “This visit will lay to rest the prejudices and fears of the past.”

According to Rev Harold Good, it is simply prejudice which would cause a Protestant to oppose the Pope’s visit. Not out of a devotion to God’s Word or a respect for Biblical truth or a desire that lost souls would not be tricked by that emissary of the devil.

This is simply Rev Harold Good harnessing the spirit of that notably evil king of Israel when he deliberately misrepresented God’s servant, Elijah.

When Ahab met Elijah in 1 Kings 18:17, we are told: “And it came to pass, when Ahab saw Elijah, that Ahab said unto him, Art thou he that troubleth Israel?”

Ahab blamed Elijah for the problems in his kingdom, which included a great drought, rather than looking at his own sin. Elijah responded boldly to this wicked ruler, and his words would just as easily be applied by a child of God to leaders of apostasy like Rev Harold Good. 1 Kings 18:18 says: “And he answered, I have not troubled Israel; but thou, and thy father’s house, in that ye have forsaken the commandments of the Lord, and thou hast followed Baalim.”

Ahab’s comments to Elijah are true slander, and perhaps when Rev Harold Good scuttles down to Dublin to meet his buddy he can instruct him on the meaning of the word.

Completing the unholy trinity of mainstream Protestant churches running open armed to ‘Papa’ is Rev Trevor Gribben, who holds the positions of General Secretary of the Presbyterian Church in Ireland and Clerk of the General Assembly.

Rev Trevor Gribben said he is certain many people of differing theological and political views would want to “join our Catholic neighbours” in welcoming his visit.

“The attendance of Pope Francis at the World Meeting of Families will greatly enhance the affirmation of the place of the family at the heart of society, and that is to be welcomed.”

What weasel words! All the visit of Pope Francis will enhance is the level of deceit and influence he exerts over the deluded Roman Catholics of Ireland.

Rev Trevor Gribben continued by saying he would “certainly welcome” a visit to Northern Ireland by the Pope at some stage in the future.

This is a scandalous betrayal of his Protestant heritage and of the sacrifice so many Protestants have made in the past to ensure the beautiful simplicity of the gospel reached the common folk. It is only the gospel which can save a sinner and Rome sought to hide it from the common people, in turn condemning them to hell.

This apostasy is warned of in the Scriptures. 1 Timothy 4:1-2 says: “Now the Spirit speaketh expressly, that in the latter times some shall depart from the faith, giving heed to seducing spirits, and doctrines of devils; Speaking lies in hypocrisy; having their conscience seared with a hot iron;”

Rome certainly falls under the category of offering “seducing spirits” and “doctrines of devils” and we have seen such a departure from the faith in these mainstream churches in Ulster.

We are not so much as aware of a single clergyman in any of these denominations speaking out against the Pope’s visit to Ireland and that is to their eternal shame.

If anyone reading this is a member of any of these specified denominations, we would urge you to enquire of your minister what their view is and what they are doing to challenge these treacherous comments they have made.

We would also ask every reader to pray the Pope will not come to any part of Ireland. God can cause events to move against this fraudster and we ought to pray he will intervene and keep that Romish man of sin away from these shores.

Matthew 21:2: “Jesus answered and said unto them, Verily I say unto you, If ye have faith, and doubt not, ye shall not only do this which is done to the fig tree, but also if ye shall say unto this mountain, Be thou removed, and be thou cast into the sea; it shall be done.”

James 5:16: “The effectual fervent prayer of a righteous man availeth much.”